Hangzhouâ€™s main art museum, known as the Zhejiang Provincial Museum, Â sits on a nicer plot of land than any museum Iâ€™ve ever been to, including the Louvre in Paris and National Gallery in London. Itâ€™s on a small bend in the road that circles the cityâ€™s famous Xi Hu, or West Lake. From the museum entrance, you look out across the lake at a particularly lovely spot, with a small steep island ahead and the steeper mountains beyond. The museum itself is modern, in a classically-Chinese format, with pavilions reached by gabled walkways, set among small streams teeming with koi.Â

The setting is perfect, but sadly, the museumâ€™s contents are anything but. One pavilion offers a bunch of world â€œart treasuresâ€ that looked like they were bought for ten bucks each at airport souvenir stores . A low point: a set of mounted bull horns from Indiana. Another beautiful pavilion had the paintings and personal effects of a Hangzhou-born 20th century artist who had studied painting in France in the early part of the century, and then did some so-so pastiches of Chinese subject matter, incorporating elements of Cezanne, Picasso, Monet among others.Â

A pavilion said to hold â€œhistorical relicsâ€ was locked and empty. Finally, you get to the two buildings with Chinese porcelains. My hopes remained high, since, after all, Hangzhou is the greatest of all Chinaâ€™s cultural cities, capital of the Southern Song dynasty, which produced (for my money) the finest porcelains the world has ever seen, including Jun, Ding, Guan, Yaozhou, Longguan, Qingbai, Cizhou, Ge styles. (The bowl above is an example of Song Dynasty Guan porcelain.) Iâ€™ve had the good fortune to see a lot of Song porcelains over the years, in museums in the West, and have handled a fair number at auctions in London and New York.Â  Many were produced close to Hangzhou.Â

My not-unrealistic expectation, therefore,Â  was that the Hangzhou museum would have both more and better Song porcelains than Iâ€™d ever seen. So sure was I of this that I invited four CFC colleagues to come along with me, after we finished a client meeting.Â

Bad choice. The museum, though in a gorgeous setting on a lake fabled for its beauty and historical meaning, is mainly a sad reminder that many of Chinaâ€™s most important art treasures are held outside the country, in museums and private collections. The porcelains in the Hangzhou museum look like (and most probably are) the leftovers after all the best pieces had been spirited away. The celadons have little sparkle or translucence, and have a gimpy shape.Â  There are no examples of the Jun and Guan styles most prized by connoisseurs. The one Yaozhou bowl is clumsily carved. Song burial urns are among the least ornate and less precisely-molded Iâ€™ve ever seen.Â

The two pavilions with Song porcelains are a colossal disappointment, not just because the art works are generally of middling quality. Instead, a museum that should be a encapsulation of the greatness of Song culture is, instead, a subtle reminder of how much has been lost or pillaged.Â  Thousands of Song wares are in collections, public and private, around the world. At least six times a year, Sothebys and Christies hold auctions in London, New York and Hong Kong that include dozens ofÂ  works of Song porcelain far better than any on display in the Hangzhou museum. Museums from Tokyo to Paris to Washington D.C. are loaded with great works from the Song.Â

But, here in Hangzhou, there are only cast-offs. Among the millions of Chinese who come to Hangzhou each year as tourists,Â  most will likely leave with no concrete appreciation of the paramount artistic achievements of the Song culture that sprang from here.Â  Instead, many must end up wondering, after visiting the museum, if thereâ€™s really anything much to be proud of from that period. One of the two pavilions for Song porcelain is almost entirely made up of shards of the most common sort of household pottery from the Song era, not the exquisite pieces crafted for emperors and scholars.Â

The effect is a little like visiting Tiffany, expecting to ogle the diamonds, and finding it filled instead with broomsticks and knitting needles.Â

The Chinese government, quite publicly, has been seeking to block the sale at auction of art objects looted from the Summer Palace in Beijing. Itâ€™s a small step toward the goal of one day recovering more of Chinaâ€™s lost artistic patrimony. Iâ€™d personally like to see the Chinese government more active, not just blocking the sale of items stolen long ago, but also buying some of the more important Chinese antiques that come on the market.

Itâ€™s easy to understand why the Chinese government has so far refused to do so, since they donâ€™t want to let others profit from what it sees as wrongful expropriation. But, as a lesser of evils, Iâ€™d prefer them to bring back some of the more beautiful objects, and add them to the collections of important national museums like the one in Hangzhou. That way, at least, more Chinese would have opportunities to admire up close the crowning achievements of Chinese culture.Â

Itâ€™s a good side project for CIC, Chinaâ€™s sovereign wealth fund, and Chinaâ€™s State Pension Fund. Along with trying to secure the countryâ€™s financial future, these two organizations could also invest, on a comparably small scale, to secure more of the countryâ€™s incomparable artistic heritage.Â

The museum visit left me feeling sad, but also resolved to do my own small part. Iâ€™m fortunate to own a few Chinese porcelains and jade pieces from the Qing and Ming dynasties. The jade was left to me by my grandfather, who started collecting in the 1950s. Iâ€™d like to donate the art works to a Chinese museum when I die, if not sooner.Â  While nowhere near as important as the items regularly at auction at Sothebys and Christies, they are decent examples of the output of some of Chinaâ€™s finest artists and artisans.Â

Art is a shared inheritance. But, more of Chinaâ€™s treasures should be seen where they were crafted.Â 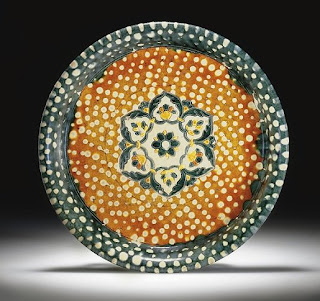 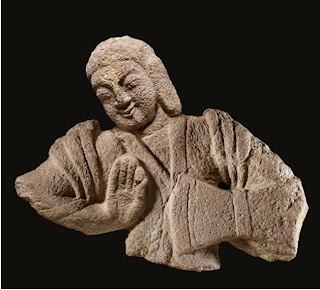 Â Â  Â  Â  Â
Â
A Tang Dynasty Sancai dish and a Wei Dynasty Aspara
Both of these sublime works of art are among several hundred Chinese objects being auctioned at Christie’s in New York next month. Â While I won’t be present, or bidding. I do enjoy studying the photos and reading the descriptions in the online catalog. What I miss most, though, is handling the objects.Â

One of the great joys of my life, during the years I lived in New York and London, was visiting Sothebys and Christie’s auction houses during the preview period for their twice-annual sales of Chinese art. Anyone attending the previews is allowed to inspect the objects in the auction.Â
So, I’ve held priceless Chinese objects in my hand, and studied them patiently, up close. Of all those I’ve held, what stays most in memory is the tactile sensation from a Tang Sancai ceramic, tracing with a finger the sharply incised edges of the petals, the smooth and slick three-color glaze, the dry friable texture of the unglazed bottom.Â
Not much else made 1,200 years ago is as understandable, relevant and familiar as a Tang dish. We use similar-shaped objects for similar purposes every day. And yet, the Tang dish cannot be equaled in its perfected and exacting beauty.Â