Chinaâ€™s ruling State Council last month released a much-anticipated plan meant to kick the countryâ€™s huge state-owned enterprise (SOE) sector into shape. No small amount of kicking is required. Not all but many of Chinaâ€™s 155,000 SOEs are inefficient and often loss-making. Where SOEs do make money, itâ€™s usually because of markets and lending rules rigged by the government in their favor.

Gong He Chun was founded in 1933 as a private concern, but was then, like almost all other private businesses, expropriated in 1949. Itâ€™s been an SOE ever since, its shares owned by the Yangzhou government branch of SASAC, the government agency now responsible for holding shares and guiding the management of all SOEs. Gong He Chun somehow held on through the long dark years during Mao Zedongâ€™s rule when most restaurants in China were shuttered, and investment in the SOE sector was directed toward Stalinist heavy industry â€“ steel mills, coal mines, power plants, railroad rolling stock and the like. 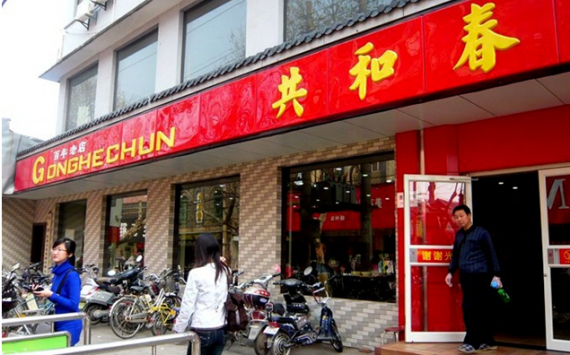 At Gong He Chun, as all its many cooks are taught, they must fulfill Wangâ€™s precise prescription: the overall outward appearance of a sparrowâ€™s head, with its slender sides resembling a lotus leaf and its bottom fried to the color of a gold coin. If only the management and workers at Chinaâ€™s huge substandard SOE oil refineries took as much care, Chinaâ€™s polluted skies would surely improve.

While the quality of what comes out of the kitchen is world class, there are places where the dead hand of state ownership can be detected. The toilets are primitive, plastic plates and bowls are old and chipped, and the overall dÃ©cor looks like a 1950s US high school lunchroom.

Iâ€™m lucky to know the China chairman of Din Tai Fung, and have spent time with him inside Din Tai Fung restaurants. Every detail is sweated over by the chairman, from the starched white tablecloths to the polish on the bamboo steamers to the precise number of times a xiaolongbao dumpling should be pinched closed. Gong He Chunâ€™s state owners are utterly devoid of the drive, vision and hunger for profits and expansion that only a private proprietor can bring.

A newly-announced government policy on SOE restructuring has already come in for criticism in China. Xi Jinping and his State Council â€“ once keen to expose SOEs to more market rigor and competition â€“ have opted for a more â€œsoftly-softlyâ€ approach, with no specific targets for improving the woeful performance of many SOEs. One reason is that a fair chunk of Chinaâ€™s SOE system is in chaos, thanks to a more high-priority policy of the Xi government. Every week brings new reports about bosses and senior management at Chinaâ€™s largest SOEs being investigated or arrested for corruption.

If there was ever an economic rationale for a small chain of traditional dumpling shops to be owned by the state, no one seems able to recall it. What profit Gong He Chun makes is not being reinvested in this rare SOE jewel, but is used instead to prop up SOE losers in Yangzhou. As Chinaâ€™s new SOE reform policy now begins its tentative roll-out, it looks certain Gong He Chun will for years to come remain a rare bright spot in a blighted SOE landscape.